In the last post I explained that I've started incorporating driving questions into Biology class. I use these driving questions to capture student interest, scaffold the progression of learning, and assess the students throughout the unit. This is my first foray into organizing class in this way, so by no means are these posts prescriptive. In fact, I hope they generate feedback about the aspects of this method are solid and those that need improvement.

With that in mind, I offer up the next topic the students investigated as a part of Ecology: Energy Transfer.

I started this unit by showing a clip from the TV reality show "Survivor."


In this video, the survivors have just won some chickens (and chicken feed) as a reward. Because of their hunger, they start to fantasize about how they'd like to cook the chicken.

After students watched the video, I had them privately answer the following question, which was essentially the driving question for the unit:

The Survivors in this video were very excited to cook their chickens!  If you were on this episode, what would you suggest to your fellow castaways?  Indicate your thoughts by choosing one of the options below:

The next day in class, student participated in a whole-class, active simulation which is designed to help them understand that the amount of energy available at each trophic level is lower than the level before it. Here's a brief overview of what happens during the simulation:

When the data is averaged, it's clear that the amount of energy decreases with each successive trophic level. This is because the organisms are using some of their energy, or it's escaping as heat. I don't "tell" the students this however. Instead, I ask them to analyze the class data and design a model that describes changes in energy through a food chain. Here are some samples of their work: 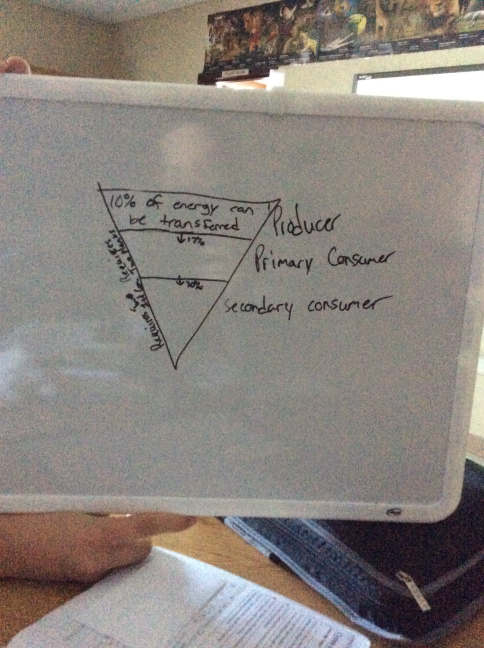 I was ecstatic when I saw this last model because even though the students hadn't yet learned about energy pyramids, they ended up creating an (upside-down) energy pyramid based on the data. The understanding came from their own experience, rather than what I or their textbook told them.

Now that students had some in-class experiences around the content, and were hopefully generating questions in their minds about that content, they were primed for application. They learned about energy pyramids, the "rule of 10%" in energy transfer, and worked on mathematical applications of the rule. After the application phase, I ended the unit by proposing the "Survivor" question to the class one more time. This time, students chose their answer and went to a corner of the room based on which answer they chose. Once in the corners with like-minded classmates, they worked to produce an evidence-based argument to support their answer. Finally each group presented its argument and we wrapped up the topic with a whole-class discussion around the arguments.

Even though Answer 1 is the preferable choice based on energy transfer, other answers could be argued as well. So what I really like about this question is not that many students end up with the "right" answer, but that they have some good discussion of their thoughts while trying to reach a consensus on the "right" answer.
Posted by Amanda Meyer at 8:47 PM